We are excited to release our 2009-2010 Annual Report!. We truly care about transparency and invite all of you - partners, donors, volunteers, and friends - to participate in a conference call (dial-in details released later this week) to ask questions and learn more about our impact. 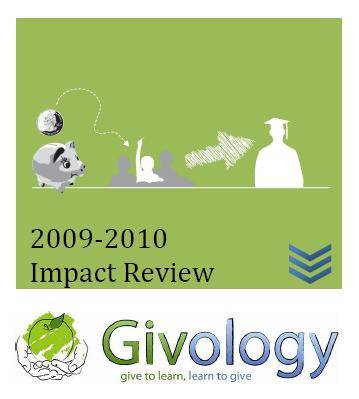 We are pleased to announce that in two years of operations, we have raised approximately $111,707 to support over 2,635 students in 19 different countries through 30 grassroots partners. Our organization has 4,000+ supporters on Facebook, Linked-in, and Twitter, 1,400+ registered donors, 12 chapters started at universities, high schools, and various cities, 30 core team members and 90 volunteers globally. Notably, we received the Intelius Award for "Best Student-Run Social Enterprise", received a "Top Education Non-profit" rating from GreatNonprofits, and won a significant Google Grant Award, in addition to being selected once again as one of the "Top 100 Student-Run Enterprises in the United States" by the Kairos Society for Entrepreneurship. As we formed new connections through social media, we were extremely pleased to be featured in Nicholas Kristof's inspiring book Half the Sky, Vivanista, New York Times, among other print and media sources.