More than Me is truly an incredible organization, and one of Givology's newest partners. We're so proud to raise funding to support their cause! 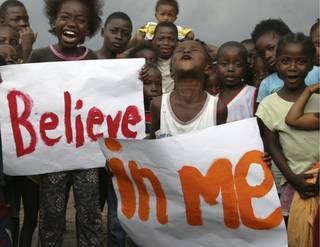 The story behind More than Me is truly compelling.

The idea for More than Me began when its founder Katie Meyler was working in a West African village, Koryah, in post-war Liberia. She lived at an orphanage with 86 children whose parents had all been brutally murdered in the war. These children had lost everything, but they somehow had so much joy. She lived in Koryah for seven months, and after her contract with the non-profit expired she moved to the capital city, Monrovia. She rented a room from missionaries and worked with a local group to help 150 returning refugee children find school scholarships. The stories of those children changed her.

One day Katie went for a walk with Liberian friends in a slum called West Point. She met an 8-year-old girl named Regina, who slept on a cement floor in a room infested with rats. Regina's dad had been killed in the civil war and Regina and her mom were struggling simply to survive. Although Regina had never gone to school before, that year she got to go and even got a more comfortable place to live. So did several other children like Elizabeth and Rosaline and Princess!

When Katie returned to the US unsure of what to do next, she was reminded by a friend that the decision was not just about her. This idea ended up inspiring the name of the organization, More than Me. It's all about living for something more than yourself. Do more, think more, act more. The world is so large, be willing to step out and make a change.

More than Me was formed organically as a means to keep helping girls get to school! Often when talking to children in countries where there is no free education for all, children tell them that their biggest dream is just to go to school. More to Me does not think that this is too much to ask. So these children's dream has become their mission.

Since putting their first girl in school...then second...and now their 32nd, More than Me's dreams have no limit. They are still trying to put more girls into school, but have also talked about opening a school for the current girls, finding work to support the children's families and having all the children in West Point enrolled in school! They are also working on a social enterprise initiative called the Love Her Cover, which is a laptop slip cover that is manufactured in Liberia by a female fair wage factory.

The students that they want to raise funding for have incredible stories to share - help us reach our target to make a difference for these kids!