I haven’t yet posted about my Madrid adventures at the Ford Focus Global Test Drive over President’s Day Weekend yet – looking back, that entire experience feels so surreal, completely extrapolated from my daily reality. Sometimes I wonder, “Was I actually there?” (And then I see the Ford Focus parked near by apartment and remind myself that indeed, I did go to Madrid)

As a re-cap, I left for Madrid on Thursday evening, arriving mid-day on Friday to meet all the other finalists from around the world. With each finalist representing a charity, I met some truly inspiring individuals championing great causes, many of which we are keen to bring on as a Givology partner. For example, we are now partners with More than Me (Liberia) and the Tea Leaf Trust (Sri Lanka), both incredible causes that we are proud to support. In addition, Ford invited many influential bloggers, youtube celebrities, and press & media to cover the event. In speaking with these people, I learned so much about how much more we can do with social media to generate awareness creatively for Givology and to engage our supporter base. Coming back to the states, I have a renewed sense of momentum of where Givology can be.

I spent Friday getting know the participants – since Catherine and I got to Madrid early in the day, we had a chance to go and explore the city. Having not been in Madrid since 2007, I enjoyed visiting some of my old haunts and favorite walking routes through Plaza de España, Plaza Mayor, Puerta de Sol, El Parque Retiro, Paseo del Arte, and the Plaza de Cibeles. With extra time on our hands, Catherine and I also went to see the Thyssen-Bornemisza Museum, which I had unfortunately missed during my time in Madrid. What an extraordinary collection of art, spanning from Renaissance masterpieces of Caravaggio to modern pieces by Kandinsky! We had to rush our way through given the time constraint, but we definitely got a great flavor. 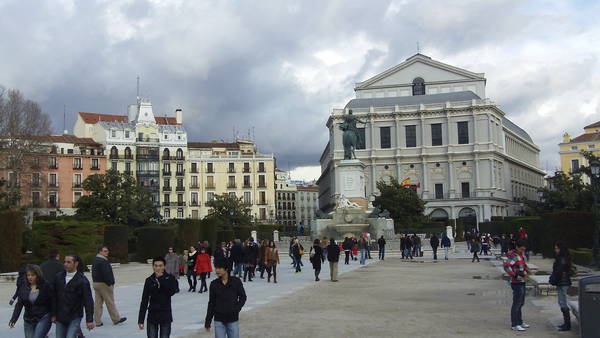 Dinner was an elaborate affair at the banquet hall of our hotel, the Hotel Silken Puerta América Madrid. I sat next to Teri and Greg from Philadelphia, who coincidentally work as media consultants to Wharton. I also met Katie and Stephanie from More than Me, who we recently welcomed on as an official Givology partner, Adam and Gavin from More for Hunger, Chris from Jubilee Project, among other really great people! With good food and good company, we had a great time getting to know each other in a relaxed, convivial atmosphere.

[As a side note, frankly, I’ve never been to an odder hotel. Each floor featured the work of a different modernist designer, who pushed concepts to an extreme. Our floor felt like a space-pod, our rooms completely white and curved, the bath-tub in the middle of the room surrounded by billowing white fabrics. Another floor was comprised of pure black glass, complete with black glass floor and furniture, glass bathroom doors (no privacy!), and even black toilet paper. Truly a cool hotel – not necessarily “comfortable” but stunning to the visual senses!]

The next morning, we awoke bright and early to go to INTA for the test track. At first, having not driven much over the last six years, the thought of driving on a test track petrified me. When we arrived, however, excitement overwhelmed my nervousness. As part of the White Team, we competed with the other teams on four different activities: 1) Speed Test, 2) Car Handling Test, 3) Video Test, and 4) Fuel Economy Test. With my luck, Catherine and I had to compete in the Speed Test first…my first time driving in six years. 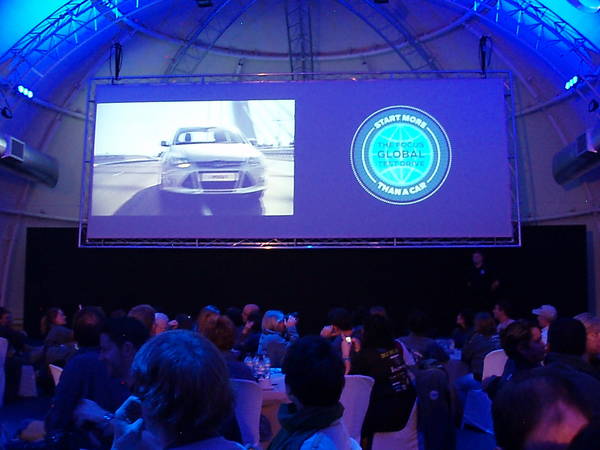 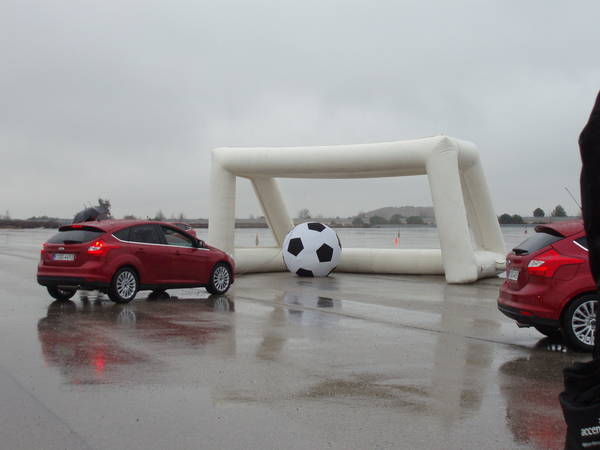 With coaching from a professional driver, I managed to get a decent score, partly accelerated by my complete lack of driving experience (and hence, near complete lack of fear or understanding of what driving “ought” to be like). Then, we moved to an obstacle course where we pushed the traction system of the Focus to the limit by driving through a slalom on a slicked surface and then performing an emergency brake before ramming into a giant soccer ball to score a goal for points (I’m not kidding!). After lunch, we had a quieter afternoon where we learned about the features of the Ford Focus and the basics of driving greener. Throughout the day, we had famous racers just circulating and mingling with us, including the stunt driver for the Fast and the Furious series! In addition, bloggers and media folks abounded, inquiring about our cause!

Even for a non-car enthusiast like me, I found the activities very fun! As both my parents drive cars more than a decade old, I never realized how much technology had progressed. Not only can the Focus sync with a phone and become a wifi hot-spot, but it also has software/sensors to parallel park itself! 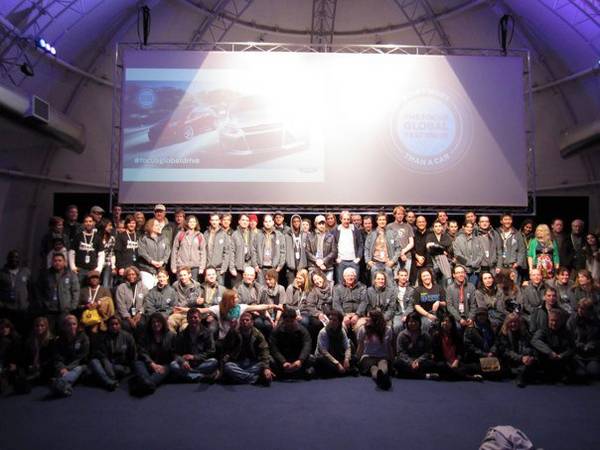 T hat evening, we went back to the hotel for an evening party at the rooftop club. To Catherine and my great surprise, we discovered that along with the guys from the Jubilee Project, we won the “Drive Smarter” competition! For that, we each received a very heavy trophy made of glass. The party was lots of fun – a chance to relax and to meet so many interesting people from around the world. 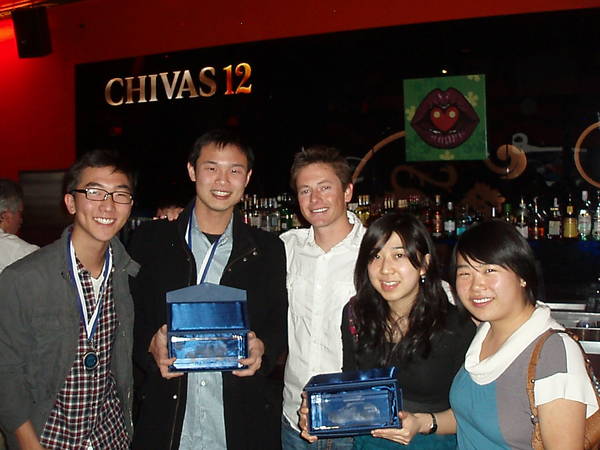 The next day, we had the chance to either go to Toledo or Madrid. Having been to Toledo twice, I decided to stay in Madrid, intending to take a trip down memory lane. The guide first took us to the Prado Museum, where we rushed through the highlights (not enough time!). I then wandered off on my own, taking the metro to ICADE, the school I studied at, and ambling through my host grandmother’s neighborhood. That evening, we split up into different groups for dinner before our departure the next morning, sampling the local cuisine at some of the most well-regarded restaurants in Madrid.

When I landed in New York City, I had trouble believing that so much has transpired over three days. I recalled the “La vida es sueño” by Pedro Calderon De La Barca:

Most importantly, I feel a renewed sense of spirit and direction. Having met a lot of creative organizations that have launched youtube videos and social media campaigns that have raised tens of thousands of dollars and created a followership of >1 million in some cases, I have a better sense of what we as Givology can do to tap into these opportunities. What an empowering weekend! Through the power of social media networks, word of mouth, and online communications, we can exponentially double and triple our impact each year.

As part of the requirement for the program, we had to make a video of the event. Here's the one I made!