[b]MEGAN FOO: Why did you decide to volunteer for Givology?[/b]
[b]RACHEL CHUANG[/b]: I first started volunteering with Givology the summer before I went off to college. In the past I’d always done a lot of research or science internships. I was really focused on the areas of biotechnology and chemistry, but right after I graduated high school, I decided to explore and look into some nonprofit internships and try something new. How I heard about Givology was that Joyce and I actually went to the same high school but she graduated a few years earlier than I did. Givology’s name has been passed around at Thomas Jefferson High School (where I went), and that’s how I first heard about it.
[b]MEGAN FOO: Can you tell me about your experience as Givology’s Special Projects Director and your work writing and editing [u]A Guide to Giving[/u]?[/b]
[b]RACHEL CHUANG[/b][font='Times New Roman', serif]: [/font]I find being the Special Projects Director really liberating because I get to do different projects every year, and I do a bit of everything – a little bit of social media, a bit of research. For example, earlier this year I was working with Jia [Wu] on our [url=http://www.giveinspiration.org/]Give Inspiration[/url] project where we were trying to get a bunch of artists to work together and talk about what inspires them through art. I thought that was really cool and something really interesting to hear about, as one of Givology’s new initiatives.
Right now, we’re working on the second edition of [u][url=http://www.amazon.com/A-Guide-to-Giving-ebook/dp/B00B46UV5I]A Guide to Giving[/url][/u], so I’m also really excited about that. For our first edition, I started off working on the book as an intern over the summer of last year. I was gradually given more responsibilities. I not only was able to advance to Special Projects Director while working on this book, but also was able to advance my own understanding of volunteering and Givology’s mission. I was able to read all these really eye-opening and first-hand accounts. For example, I remember interviewing Kwabena Danso of the [url=http://www.givology.org/~yproject/]Yonso Project[/url]. That nonprofit organization is one of Givology’s partners, and is based in Ghana. At the time, I was already at Cornell University and he was in Ghana overseeing the projects of the organization. We started talking and it was pretty late where he was due to the time difference. I just felt like there was such a big difference between how he’d grown up and how I’d grown up. For me, going to college is what is expected, but he actually considered going to college a privilege. So, he went to the University of Ghana, was able to meet some exchange students, and start a nonprofit organization. He considered going to college such a huge honor that he wanted to be able to share the same benefits of education with other people. Working on [u]A Guide to Giving[/u] just got me really interested and inspired in Givology’s focus and what giving really means. 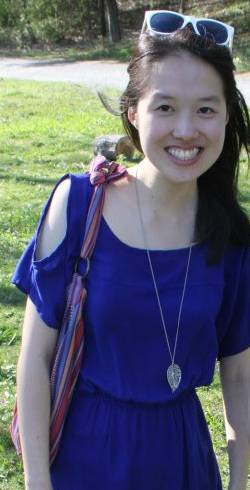 [b]MEGAN FOO: What are your focus priorities for the second edition of [u]A Guide to Giving[/u]?[/b]
[b]RACHEL CHUANG[/b][font='Times New Roman', serif]: [/font]We’re definitely talking about upping it and adding more. We’re covering a lot more nonprofit partners, and also some organizations that are just really up-and-coming in the non-profit world. In the second edition, we’re also hoping to add more focus on social media and its importance in a nonprofit, as well as infographics to present information to the reader in a more visual and exciting way.
[b]Can you tell me about the Givology chapter that you’ve started at Cornell University?[/b]
I started it last year with a few friends and I’ve actually been really surprised about how it has expanded. Not only at the number of people that attend meetings and are on our email lists, but also, people passionate about the same issues. We’ve discussed together different aspects of the impact that education can have on. Meeting people with similar interests through the chapter has been really awesome and we’ve bonded over bake sales. We’ve also held some events that promote volunteerism on and off campus. We’re working with a local high school, doing service projects together in the community.
One of our programmers is also helping us develop a website that will hopefully be up by next year. It will display a bunch of pictures and eventually audio and video of people describing what significance giving has for them. Hopefully, it will end up being a compilation of students at Cornell and also people living in Ithaca.
[b]MEGAN FOO: What are your hopes for Givology’s future?[/b]
[b]RACHEL CHUANG[/b][font='Times New Roman', serif]: [/font]I hope that we can continue to make an impact, establish more partnerships, and be able to send more kids to school. It’s really exciting to be part of Givology now because we are starting to receive applications for so many more partnerships and are expanding our reach even more. I’ve also seen our social media presence just imcrease so much from the time that I started as an intern to now. Now, we have this great [url=https://www.givology.org/~joycemeng/blog/17718/]Instagram contest[/url] and our [url=http://givology.tumblr.com/]Tumblr[/url] and all of these social media outlets are being developed and honed in on.
As for other hopes for the future, I think it’d be great if we could get more involvement between the different chapters. Just being able to know what’s going on with other schools and other chapters would be a helpful way to branch out. Givology operates on so many different levels, colleges and regions, and also internationally, which is great. But I think that staying connected is also a really important aspect of volunteering.
[b]MEGAN FOO: What inspires you about Givology’s mission?[/b]
[b]RACHEL CHUANG[/b][font='Times New Roman', serif]: [/font]I think it’s interesting how there’s so many aspects and facets of it. It’s not just promoting global education, but there’s also the entrepreneurship side of it, and also the idea that anyone can help support a student’s education. The whole gist of [u]A Guide to Giving[/u] is that anyone can make a difference, but this is how you can be effective while doing so. Behind the mission is just so much enthusiasm for volunteering, but it’s also linked with solid research and facts about how you can have a real impact on people around the world. Besides that, just hearing about these different experiences through the book and through our partners, I think that education and learning itself is very important.
[b]MEGAN FOO: What do you enjoy the most about your volunteering?[/b]
[b]RACHEL CHUANG[/b][font='Times New Roman', serif]: [/font]Through Givology, especially in the Internet Age, we are able to reach out and affect so many people through the book we published, or the posts that we make and I really enjoy that part of volunteering. Besides that, I also enjoy getting to meet or talk to some inspiring and amazing people, whether they’re the people who are giving or the people who are receiving from the efforts of Givology.
[b]MEGAN FOO: What do you find the most challenging aspect of being the Director of Special Projects?[/b]
[b]RACHEL CHUANG[/b][font='Times New Roman', serif]: [/font]I think the most challenging part is communication. We’re all volunteers so we all have jobs and occupations outside volunteering at Givology, as well as the fact that most of our communication does go through email. I think it takes a lot of responsibility for myself to stay in contact with everyone and to stay on top of my duties. But at the same time, these challenges are worth it and give me experience in working in a nonprofit.

Teacher Appreciation Interview with Aideen Robbins of The Umbrella Foundation

Interview with Macartan Gaughan, Director at the Umbrella Foundation Nepal

Interview with Marilena Choguaj, Coordinator of Innovation at Starfish One by One

Giving Back - Interview with Gena Blumstein of Citibabes

Educational Innovation in Economics: Interview with Kamil Pruchnik of Brickonomics

Interview with Mary Dupont of the EfforTZ Foundation

What Does Girls&#39; Education Mean to You?

Our Featured Givologist of the Week: Prashanth Srinivasan, President of the NYC Chapter

Our Featured Givologist of the Week: Max Jaychuk, Head of Google Analytics

Be the Roots of Change - Interview with Katence Olson of GIVE

Our Featured Givologist of the Week: Dorothy Chen, Tech Associate

Our Featured Givologist of the Week: Will Flattery, Director of Sponsorships

Our Featured Givologist of the Week: Avika Dua, Newsletter Editor-in-Chief

Our Featured Givologist of the Week: Allison Zaucha, PR Director

Our Featured Givologist of the Week: Rachel Chuang, Director of Special Projects

A Kickstarter for Positive Change: Interview with Claudio Blunschi of CV-4D

New Volunteering Videos Uploaded to Our YouTube Channel! [Part One]

Our Featured Partner of the Week: La Vallee Community Update

Our Featured Givologist of the Week: Liza Rafael, Media Director

Sculpting Lives, Shaping Children&#39;s Futures Through Art: Art for a Cause Feature

The Potency of Documentary Film: Interview with Siddhi Sundar

Our Featured Givologist of the Week: Liu Jiang, Givology CDO