[font=Arial]Hello Givology community! [/font]
[font=Arial] My name is Jiang Jiao and I am 14 years old. I currently attend Dai Bu middle school in Dai Bu village, Hui Ze county, Qu Jing city, in Yunnan province. I am a student in Class 173 at my third year of middle school. My father has passed away, leaving my mother on her own to support the whole family. My older brother is 17 years old. He currently in his last year of #1 High School in Hui Ze county and is about to face the most important exam of his life, entrance exam to college. My grandfather on my father’s side had Ischemic Stroke. It is inconvenient for him to walk and every year we need to pay a large fee to cover his medical costs. This year there has been improvement in his health, so he doesn’t need to stay at the hospital anymore. Our family owns no land, so we have to rely on my mother and grandmother to work to earn money.[/font]
The year of 2015 was a turning point in my life. Before then, my parents though they did not much schooling, had their small business. Our family definitely was not rich, but we had what we needed and we were happy and our lives were complete. In the year of 2015, my grandfather was diagnosed of Ischemic Stroke and our already not well-off family took a big hit. It seemed a dark cloud was hanging over all of our heads with everyone’s moods being low. My parents would go out into the city and worked around clocks. Nevertheless the debts were piling up. Later when my grandfather’s health improved, we were all so happy and thought we finally would see hope of turning our financial situation around. Who would know that my hope was so short lived and soon there was another disaster that threw our family further down the abyss.
In 2016, my father passed away in a car crash. I was only in 5th grade at the time. Though he was not the first close family member I had lost, it was the most heartbreaking one for me as I was old enough to understand what loss of the loved one truly meant. My grandfather on my mother’s side had passed away due to a sickness a few years earlier. At that time I was too young to understand what it meant. As I got older, I understood that I I had forever lost him. The grandfather who had always cared and loved me, the person who protected me when my mother would get angry with me, was the person I would never see again. Now, my father is gone too, who I will never be able to embrace again.
I went into severe depression. If not because of the help and support my teacher and students silently rendering me, I would not have know how to carry on. They made feel so warm and cared about. At the same time, I also understood I would truly never see my father again and I should grow up and become more mature for my family.
I once thought my father would spend all of his days fooling around and having fun, leaving only my mother at home to work. Later, after I lost him, I realized I had wronged him. My dad worked day and night on his business, in order to support the entire family. He could not come home often as he went to the city and also he trusted my mother would take care of my brother and me well and also run the family like a well-oiled machine. When I look back now, I vividly remember the wrinkles that appeared at the corners of his eyes and the silver hair that stood out amongst his black hair.
Though the burden of life almost broke him, at home he would always wear big smiles when talking to us, showing us we could rely on him for anything. His shoulders later were more and more fragile, however he was forever the calm and resilient presence whenever he was home. He was like a big umbrella sheltering us from the sun on a hot day and block rain and wind in a cold winter. Right after my father passed away, even before we had a chance to let the news sink in, my mother started to receive endlessly calls demanding us to pay debts from people we knew and whose we did not. Every day my mother was being bombarded to a point that she dare not even touch the phone. Every time I would see my mother push away the phone and silently weep, but when she turned to me, she would put on a smile to comfort me. I felt like such a useless person to my family, unable to breathe. I told myself that I have to quickly grow up for my family.
My mother searched for many jobs. My two grandmothers in spite of their old ages and health conditions also went out to find work so they can earn money. Even my grandfather after seeing improvement from stroke, had found a job as well. Seeing them giving all they have to support me and my brother, I truly understand my family’s hard work and life is not easy, and I have no reason not to cherish what is in the present even more. 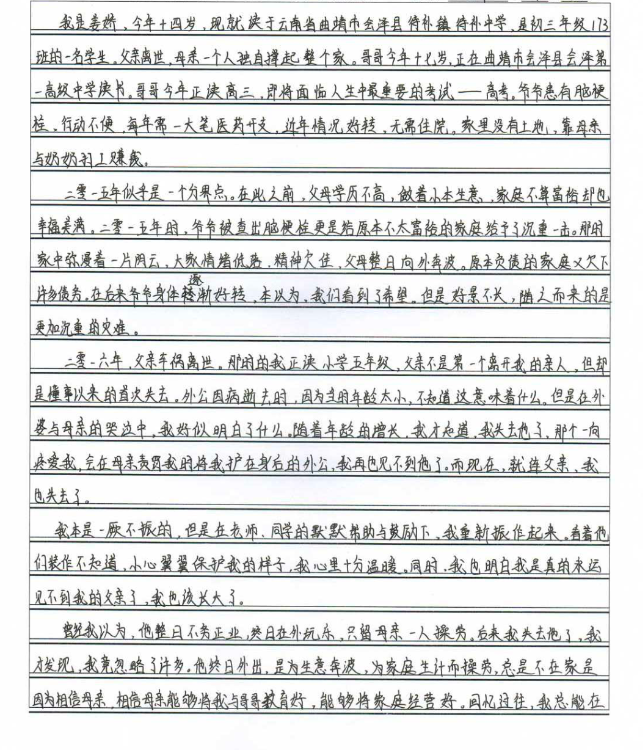 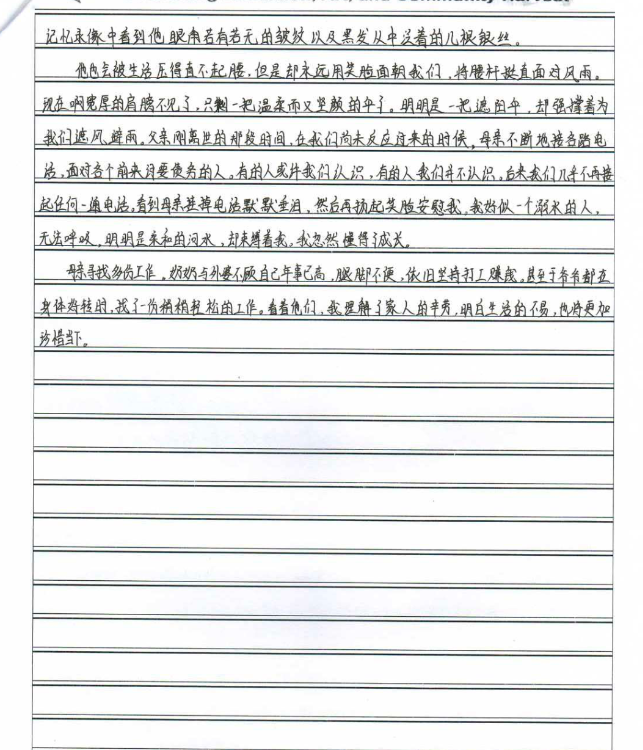