[font=OpenSansRegular, arial, sans-serif]The challenges that we face in life will undoubtedly stick with us, but it shouldn't be something that brings us down. Just like how Beethoven experienced many challenges, we should grow from them like he did, and stay optimistic like he did as well. The challenges that I have faced has shaped me into who I am today. [/font]

[font=OpenSansRegular, arial, sans-serif]I am the second girl, positive and full of sunshine. But prior to this, I faced many challenges, ones that almost broke me down. These challenges almost made me lose the people around me. [/font]

[font=OpenSansRegular, arial, sans-serif]When I was five and a half, I went to catch chickens. At first, my father didn't want me to go but finally let me after I threw a few small tantrums. I don't know what got into me that night, as I'm usually quite a strong person, but my foot got stuck in a small hole and after a few seconds of struggling, I fainted. When I woke up, I was in the hospital and saw that my father mother, sister and brother were all crying. This was because the doctor said that I might be paralyzed, and as a result, my parents took out all they had saved, but that wasn't very much at all. I used to get sick a lot when I was young, and my parents had to use up a lot of money because of me. I even stayed at the hospital for two months, and even though I was only five at the time, I couldn't help thinking that my parents could have just left me on the streets. But they didn't, and for that I am very grateful. Why does God never look after my family? Soon after I recovered and went home to continue my education, my parents had to help my brother build a house as he was going to get married soon. But because of this, my brother got into an accident. His death put a lot of stress on my family, and as a result, my grandmother passed away too. At the time, the burial of two people cost a lot of money, so from then on, my family was in a lot of debt. For a farmer's household like ours, sons were very important, and due to my parent's traditional ways of thinking, my younger brother was born. This exceeded the child quota at the time and our family was very poor. My father got taken away, but after rallying the help of my relatives, he finally returned after two hours. The financial burden grew heavier and heavier. My parents worked hard, and we worked hard on our studies, grandmother and grandfather worked hard to give us pocket money. Even though our lives are not as tough nowadays, my second eldest sister is in high school now, which costs at least a few hundred dollars a month. I am currently in year 9, and will soon need a lot of money to support my education as well. My grandparents are working hard to try and support my parents, but the dream of supporting the both of us in school is still very far away. All that my parents can do is to continue to work hard. Even though the debt has already been payed off, the financial burden might get heavier in the future. But I shouldn't think about quitting school. I endured all those hardships and survived, I will not give up. [/font] 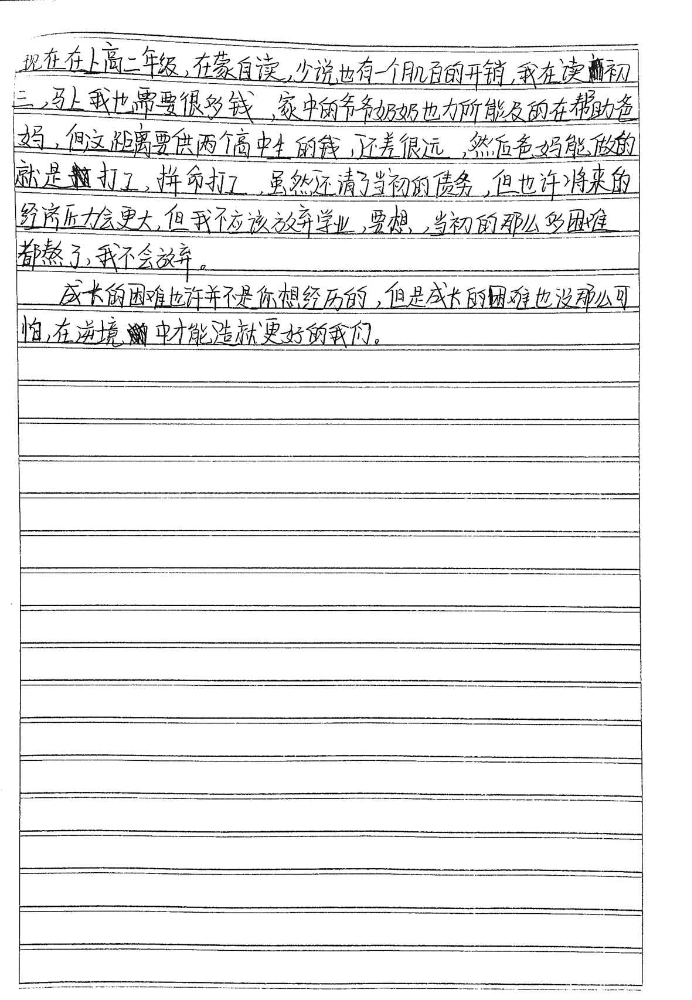 Thank you for supporting me - please see my letter