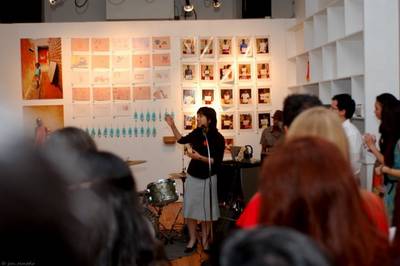 All the hard work from the Givology team and artist Jiashan Wu for the Fifty Dollars Campaign became realized this past week during our exhibition in New York City (March 26th – April 1st). The experience touched the lives of locals in New York, friends, and strangers visiting from abroad. For me personally, it is one that I will always hold close to heart. The final weeks before the show were filled with late nights on skype and persistent reach out by all to friends, businesses, influential people, the press, and local food stores. Members of our Penn team trekked up to Station Gallery, where the exhibition was held, the week before the show and spent hours helping to prepare the space for presentation. The stories I have should be coupled with theirs, because it was collaboration that made this show happen. 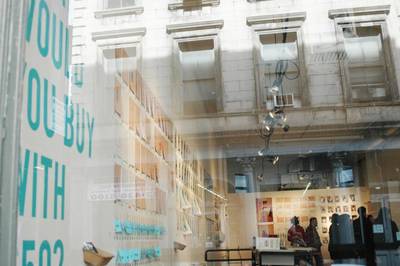 The week of the show can be defined by the sights and sounds of metropolis, taxis advertising the movie "kick ass", reed instruments and drums played in subway stations, fifth avenue ritz a short ride away from chinatown fish markets. But those experiences could be had by any newcomer to the city. I was able to spend a good deal of time with Jia, who I stayed with while I was in New York. She said that many people come to New York for the glamour, its allure bottled up in scenes from Sex and the City. The reason she liked the city though was because to get by, everyone has to work very hard. It is not a place for the senseless, although there are plenty who go there that way. Regardless of who you are, you have to work, and if you work hard and make it in New York, you can make it anywhere. Cliche perhaps, she acknowledged, but nevertheless true.

The parallels between New Yorkers and the students that we sponsor are abundant. Their work, supported in part by organizations like Givology, extends beyond the classroom. They must have a drive not only for tangible goals, but intangible states of being. This week I had the chance to experience a closer view of another life, for myself in New York, but much more importantly, of students at the Circle of Peace School and of the others who our campaign impacted.

I met the immigration lawyer who brought Joanita Senoga, founder of the Circle of Peace School, to America in the 90's. I met Joanita herself, who explained how the now 15-year-old Circle of Peace School was started. I met Joyce Meng, whose fervent execution of her goals (not to mention her role as founder and CEO) should inspire all. She and Jia met in person for the first time at the airport on their way to Uganda last December. Jia had heard about Givology through attending the Maruqee event held in NYC in August. The two traveled to the Peace School, interviewed the children in both the city and villages, and within three months, held a campaign that was featured in the New York Times: http://www.nytimes.com/2010/03/26/arts/26spare.html. I met Givology president Jennifer Q. Chen, whose high school teacher, still in touch years later, came in and donated $500 to our cause.

Throughout the week we had many visitors that came through an immediate personal connection -- however, there were others who simply walked in because they were handed a flyer (thanks to the Penn team and intern Nicole Vournazos for coming on Saturday and handing out flyers in the cold!) or heard through one of the organizations we reached out to. Two of my personal favorite visitors were the man who came in and asked if we could ship a drawing to Tel Aviv and the two little "fellars" who came in to draw robots with their mum and were from an art show that was going to run in April across the street from Station Gallery.

I was so inspired by everyone who volunteered their time to work on this project, and the belief they had in simply doing good. As both Jesse Reed from the band SoundHouse, and president of Station Shazi said, Do good, and good things will happen. The results do not need to be immediate, or even seen, but they happen. I’ll follow this post up later in the week with details about all the work leading up the event, results of the fundraising, more photos, and next steps. The campaign is ongoing, you learn more and help at: www.fiftydollars.org 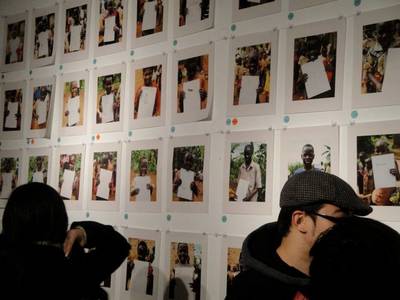