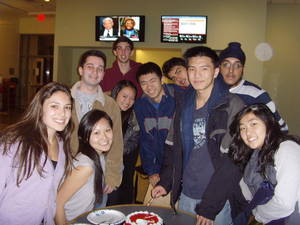 Why do we volunteer and support Givology? I recently talked with Christine Lim who helped me to answer this question. Christine, from Long Island NY is a freshman at Wharton, and Givology volunteer. She became involved with Givology through Management 100, a class that teaches leadership, teamwork, and communication through field projects in the Philadelphia, PA area. Students work with nonprofits on projects that range from awareness campaigns to benefits, learning what it means to work with each other and with clients. Numerous organizations have sponsored projects, including Givology, the American Red Cross, the United Way, and the Public Health Management Corporation.

Christine related how her team ranked Givology as their number one choice; they were drawn to Givology’s mission of education. It was this mission and the rewarding experience of working with Givology that led to Christine staying on as a volunteer. The Management 100 team set forth a multi faceted marketing campaign that raised awareness and engaged the community. The campaign included a viral video, street level marketing, and a multicultural food and dance event called World Winds. One of their proudest accomplishments was inspiring a young woman, a student at Duke, to create a Givology chapter at her university. There were challenges. Christine described a tough adjustment period learning how to work as a cohesive team, with so many hard working individuals. There were rewards as well, such as the close friendships that developed between the team members. World Winds was the crowning achievement of the team. The event used a multicultural theme featuring international dance troupes and restaurants. After the event Christine described the team’s feeling of exhilaration for what they had accomplished. I could relate to the feeling, it is one I have experienced while helping others.

I asked what you would say to future volunteers and supporters. Her response, you are supporting an amazing organization with a noble cause. Givology’s concept of small donations that support grassroots projects and student scholarships in the developing world truly can make a substantial impact in the lives of children. The organization is relatively new and needs enthusiastic individuals to help it grow. It is a chance to apply your skills, learn new skills, while making a difference in the world. I would like to thank Christine and the Management 100 team, their hard work is an inspiration.

Why do we volunteer?