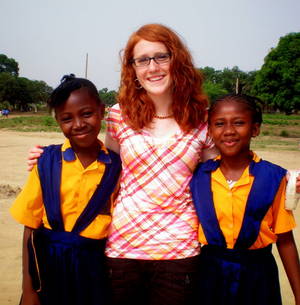 What is so remarkable about Karen Kilberg, a young college student and Givology volunteer, is that she has already found her true calling—becoming an aid worker in Africa. In this interview, Karen discusses what shaped her passionate interest in international social justice, how she decided to volunteer for Givology, and how other young people can help support the education of students in the developing world.

Tell us a little bit about yourself.

I’m currently a freshman studying international studies and peace, justice and conflict studies at DePaul University in Chicago, Illinois. I’m working towards becoming an aid worker in developing nations and crisis zones after I graduate. To fill my time outside of school I work as a barista at Caribou Coffee. I also enjoy blogging about social justice and current humanitarian issues, as well as dancing and exploring the city I live in with my friends.

I originally became interested in social justice after I returned from my first trip to Sierra Leone two years ago. Before going to Sierra Leone, I didn’t have much to compare my life in America to and I didn’t know much about issues outside of the United States. I decided one day to travel to Sierra Leone with a group from my church just to see what it was like. Never did I think it would so greatly impact my life. After seeing what life is like for the people of not only Sierra Leone, but also much of the rest of the developing world, I began to have an interest in social justice as well as humanitarian crises. I realized that I could use the privileges that I’ve been given from being born in a developed nation to speak out for those who don’t have the ability. For my peace, justice, and conflict studies major at DePaul, I will be taking several courses on the topics of social justice in order to help me better decide how I might be able to incorporate my passion in my future career someday.

What was the turning point in which you realized that you wanted to be an aid worker in Africa, a journey which you chronicle in your blog “Called to Compassion”?

Ever since a young age, I had the idea do work with an international aid organization in the back of my mind. It wasn’t until after I first traveled to Africa that that idea turned into a true desire. When I first saw the need that was in Sierra Leone, I was frustrated at how people could live in such deplorable conditions and confused on how I could tangibly help. It was extremely frustrating to see such need in West Africa while I live among such wealth at home. After seeing children who couldn’t afford to go to school and seeing people suffer from diseases irradiated in the Western world because they don’t have access to medicine made me want make a difference. It was then that I realized that I could make that into a career and dedicate my life to helping those in need by promoting human rights and social justice.

I know that I’m just one person, but I hope that someday, just one thing I do can make the slightest difference in the world. I figured the best place for me to start was to begin a blog where I promote organizations working to create a better world and where I inform people on the current humanitarian issues around the globe. That is also when I decided that I want to study peace studies at college so I can get a better understanding on how I might be able to make a change in the world. I now blog about my journey of learning about humanitarian issues and my path as an aspiring aid worker.

What have been the most remarkable experiences from your volunteer work in Sierra Leone?

I had both wonderful and sad experiences while volunteering in Africa. The most impacting have of course been seeing the poverty that we often hear so much about first hand. Hearing a television report and viewing a situation like that with your own eyes are two very different things. While I volunteered in a medical clinic in the city of Bo, Sierra Leone, I was constantly confronted with people who were being diagnosed with malaria, tuberculosis, and other tropical diseases not well-known in the Western world. On several occasions during my last trip I had to test small children for malaria. To my disappointment, the majority of the tests came back positive. It angered me that access to prevention methods and treatment are so hard to come by in developing nations, but I realized that the feelings I was experiencing would someday force me to work harder to promote social justice.

One good experience I had was seeing children attending school. In Sierra Leone, school is often times too expensive for families to pay for, so children go without. However, for the lucky ones whose families can afford the education, uniforms and supplies, or for the ones whose sponsors help out, education is a real important part of their lives. I was able to visit a handful of various schools in western Sierra Leone during my two visits and no matter where I was, one thing remained the same at every school: the happiness the students had. I realized that unlike students throughout most of the Western world, school is a privilege. Student there not only take their studies seriously, but they also have fun while learning. Education for students in developing nations is an opportunity not only to provide a better life for themselves and their families, but also an opportunity to make a difference in their community
or possibly even their country. I have a feeling that this common thread among Sierra Leonean schools is not unique to just Sierra Leone, but to all schools in developing nations. Seeing the joy on children’s faces when they were at school was both surprising and moving.

How did you come across Givology and how did you decide to get involved in its volunteer efforts?

I came across Givology one day while I was reading an article by the New York Times columnist Nicholas Kristof. I was intrigued by the description of Givology and wanted to learn a bit more so I could maybe share Givology’s mission with the readers of my blog. After looking around the website for a bit and learning about Givology’s mission, I fell in love with the work they were doing. I appreciate the fact that Givology works towards providing children in developing nations all around the world with an education so that they can go forth and make a better life for themselves, their families and their communities. What I love most about Givology is that the work they’re doing is extremely tangible. When you donate to a student or a project, your money is actually going to them. When I finished writing my blog post about Givology, I immediately contacted them to see how I might be able to help out, and as a result

I’ve been able to help in various ways and meet some the great and inspiring people behind the scenes!

How can we encourage young people to donate money to support the education of children in the developing world?

I think the best way to encourage young people to donate money would be to inform them on how their money is spent. Givology is unique in that the donor money goes to directly support the student or project you want. Most other organizations don’t function like that so it doesn’t encourage donors to want to contribute more. With Givology, however, your money goes to help in tangible ways and you can see the impact you are making through letters directly from the students. I believe that with this information, young people would be more willing to help donate to causes like Givology because they see the true impact of their donation.

What tips do you have for other teenagers and young adults who want to get involved in volunteer work within the international development and social justice realm?

My first tip would be to find an organization that you are passionate in to volunteer with. Then contact them and see how your skills might be able to help them in their cause and mission. When you are passionate about an organization’s cause and you are using your talents to help them, then volunteering is extremely fun and rewarding. It might seem like a daunting task to get involved at first, but once you make the initial contact, the rest is easy and fun My second tip would be to try to do volunteer work outside of your community. Whether it be in West Africa, East Asia, or even another poorer part of the United States, volunteering in communities in need is a wonderful experience that will open both your eyes and heart to the world in need around you. It is my belief that the more young adults who volunteer for organizations and go out to do volunteer work in the field, the more powerful the change that the next generation can make in the world. The young people who volunteer now will have a better sense of the need in this world and how volunteering, activism, and donations can make a huge impact in even the poorest areas. Because of this, I’m extremely optimistic and excited to see what my generation can do for those in need!

To read Karen’s blog “Called to Compassion,” go to http://calledtocompassion.blogspot.com/.

Why do we volunteer?