Hello Givology community!
I, myself, have good looks and my grades are pretty good as well. I wouldn’t say I’m the best, but at least, I have never dropped lower than top 20 in my class. In the overall rankings at school, I am in the top 100 students, so I have overall confidence in my upcoming high school life.
I am also proud of my achievements in elementary school. In elementary school, my grades were also decent. At the time there were many students in my class who were good at studying, and I think I also counted as one of those students! At least, teachers almost never needed to spend extra time to tutor me. I still remember at the time, I was ranked as the top few students, but I just couldn’t place first. For every test, I would have a “I want to get first place” type of attitude when testing. The most memorable time was my midterm one year. For the three subjects of Language Arts, Chemistry, and Civics, I received scores I normally got, but when it came to the Math section, I had no clue where those last few questions came from. I hadn’t even seen them before, as my realm of knowledge did not include the Math skills required to answer those questions, so I couldn’t do anything about it and ended up writing random answers. From the looks of it, I didn’t grasp all of the material, so who cared, there wasn’t anything I could do about it. However, later after returning the graded tests, I surprisingly realized I was the only one who got it right, and what’s more, I got a perfect score! Sigh, undefeated me. There was nothing I could do about it, I ended up receiving first place in the final ranking. I can’t describe how happy and proud I was from the countless struggles and effort I put in. After that day, I can’t count how many “first place” rankings I have gotten, I don’t even know.
In middle school, my life is both lively and full of freedom, but it has passed like a blur:
I originally could have focused on studying and performed my duties as a student well, but due to financial difficulties within the family, this was the destiny from God I had to accept. After starting middle school, more money was needed for school to cover both my older brother and I. In addition, the transportation fee by bus to and back from school for both of us is a large part of the costs. Now, I am in my third year of middle school, my parents have realized that the costs to raise us are very high, so they have no choice but to move to large cities to make money. More specifically, when I just began middle school, my parents made this decision. Just like that, my father went into the city to work and earn money, leaving my mother, brother, and I at home. My brother and I, who should be working hard and focused on school, have no choice but to help our parents share some of this financial burden. The workload in the third year of middle school has only increased, in addition to almost no rest time. I never get enough sleep at night, resulting in having no energy to learn during class.
Above is my self introduction. I am a middle school student in Class 141 at Da Qiao Middle School. Finally, my name is Fu Wen Zhi! 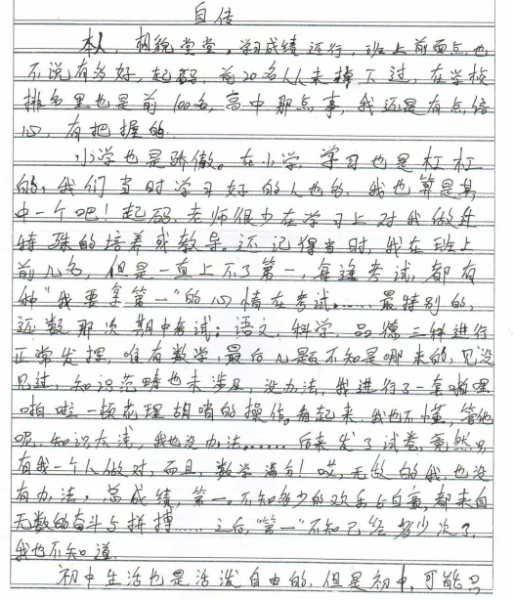 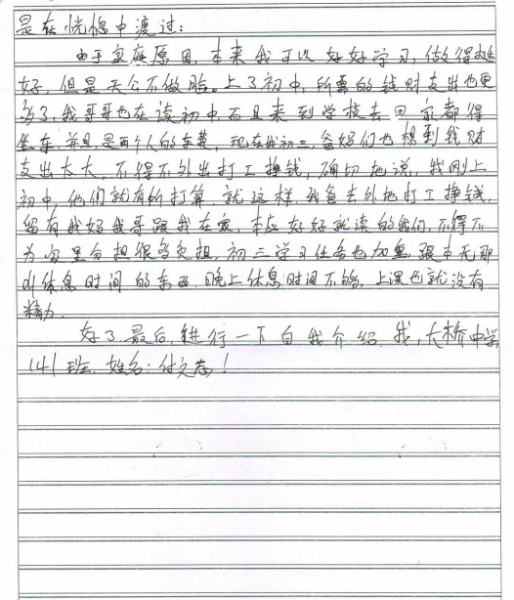